The government will supply electricity. This important decision will directly benefit consumers

The government will supply electricity. This important decision will directly benefit consumers

The Ministry of Power is preparing to provide funds to the power distribution companies in the states. For this, the Ministry can submit a proposal related to the Reform Based Incentive Package Scheme to the Union Cabinet. 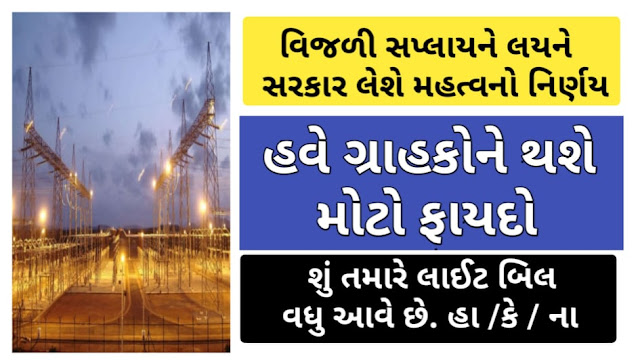 However, the Central Government will provide funds to the Secretary of Power based on the performance of each DISCOM. A package of Rs 3.12 lakh crore has been proposed under the Reform Based Incentive Scheme Fund. The objective of the government to provide an economic package to the power sector is to provide relief to the common man.

Discoms of many states and union territories will be privatized.
The exemption of some states and Union Territories under the Energy Sector Reforms Scheme will be privatized in the financial year 2020-21. This includes discoms from Chandigarh, Andaman and Nicobar. In addition, Dadranagar Haveli and Daman-Diu Disco will also be handed over to a private company. According to government sources, Rs 68,000 crore has been approved by the Rural Electrification Corporation and Power Finance Corporation to the state's DISCOM.

Discom suffered a loss of Rs 2.28 lakh crore in the last financial year.
According to sources, Rs 1.2 lakh crore can be demanded from states and union territories along with raising the lending limit.

It is expected that by the end of 2020, the losses of all DISCOMs will be reduced to Rs 1.4 lakh crore. During the financial year 2019-20, discoms incurred a loss of Rs 2.28 lakh crore. According to government sources, the state has an outstanding amount of Rs 2.63 lakh crore for DISCOM for power generation and distribution companies till June 2020. Of this, Rajasthan Discom owes Rs 35042 crore, Tamil Nadu Rs 18970 crore and Uttar Pradesh Rs 13715 crore.