Schools and colleges will open in the state from September, education minister announced

Schools and colleges will open in the state from September, education minister announced 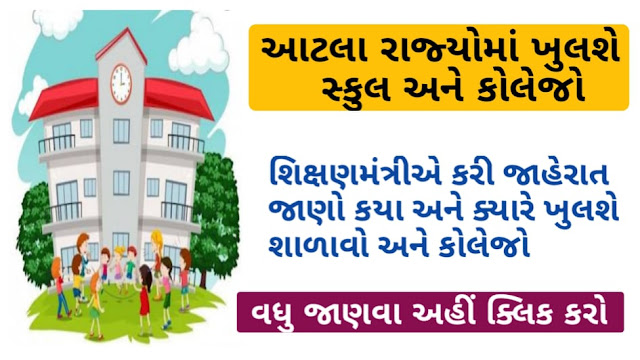 Schools and colleges have long been closed due to the Corona epidemic. Children are taking home education online. At this time, the state of Assam has decided to reopen schools and colleges. According to the order issued by the government here, the children will go to school from September 1.


Assam Education Minister Himanshu Vishwa Sharma has said that specific guidelines will be prepared before opening schools and colleges. The corona of employees and children of each educational institution will be tested. The children will be kept in school only after receiving the report of this test. If a child is positive, they will not get permission. Only those who are negative will be able to come to school.

The Education Minister defended himself by taking fees and seats. He said that as per the decision of the Guwahati High Court, each private school will give a 25 percent discount in fees to its students. All the colleges in the state have also been ordered to increase their seats by 25 percent. This seat will be for those students who have appeared for the 12th standard examination.

These rules will apply
Testing for teachers and staff in the state will inevitably start from August 21. The Education Minister said that the order was awaited by the Union Home Ministry to reopen the school. The standard operating procedure for opening schools and colleges will be announced within 24 hours. According to the Minister of Education, employees who have moved their homes due to lockdown will have to stay in their work or city for further orders. It also said that the salaries of employees whose salary was not shown on time will also be deducted.