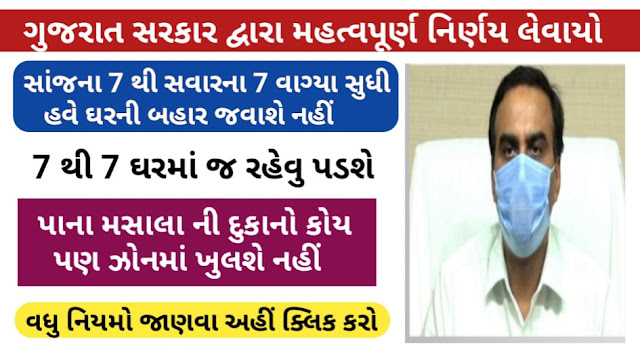 The driver and conductor will be processed. Ashwani Kumar said that shops can be opened in six municipalities in the state, just like the Red Zone, where cases are increasing. Except the essential necessities of life, no shops will be opened in the red zone, no one will be allowed to get out of the house from 7 pm to 7 am.

No one has to apply to the collectorate or Mamlatdar's office for permission. Chief Secretary Ashwini Kumar has announced that there will be no exemption for Pan-Galla shops in any area in the state. No concession will be given in Ahmedabad, Vadodara, Surat. Despite Rajkot being in the Orange zone, the lockdown will be strictly enforced.


One should stay at home in each zone from 7 pm to 7 am. Ashwini Kumar, Secretary to the Chief Minister announced no relaxation of Pan-Galla shops in the state


• No concession will be granted in Ahmedabad, Vadodara, Surat Lokade will be strictly enforced despite being in Rajkot range zone. • Should be at home in each zone from 7 pm to 7 am *

CM's secretary Ashwini Kumar announced: You can no longer go out of the house from 7 in the morning to 7 in the morning, know the state has closed before many things start?

• With 3 more cases of corona in rural Ahmedabad, the total number has reached 46. American scientists have released a shocking report on the corona case, which will wreak havoc around the world for so many months. This is not the case, the issue in the green zone, the application made to the government is also tax - 32 19275231PG