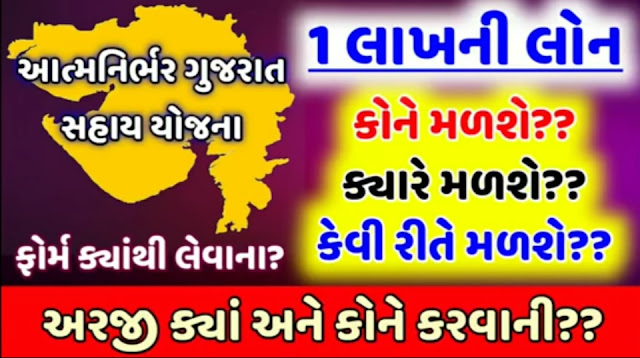 Repayment over a period of three years: No security required

Get a loan from the nearest co-operative bank: No EMI for 6 months

One million people of the state will benefit
Loan up to 1 lakh per year at an interest rate of two percent
No interest or installment is to be paid for 6 months
Loans up to one lakh will be available to artisans and small shopkeepers
The state government has announced a 3 percent loan to boost industry and economy in Gujarat. Small businessmen like traders, traders, hawkers, rickshaw drivers etc. will get the benefit of running a house through the Atmanirbhar Gujarat scheme. All you need to do is apply. After Prime Minister Narendra Modi spoke of a self-reliant India and Union Finance Minister Nirmala Sitharaman announced various packages, Chief Minister Vijay Rupani today announced a self-sufficient Gujarat assistance scheme in the presence of Deputy Chief Minister Nitin Patel and Minister of State for Home Affairs Pradeep Singh. Jadeja

10 lakh people will get the benefit of self-sufficient Gujarat scheme. Loans have also been arranged from banks under the scheme. Banks will pass the loan only on application basis. A loan of Rs 1 lakh will be available at an annual interest of 2%. While 6 percent annual interest will be paid by the state government, interest and principal will not have to be paid for the first six months. Now detailed guidelines will be issued.


A person will feel that he has received money without interest