From tomorrow, the government will get food grains, even without cards, ration items: Gujarat government 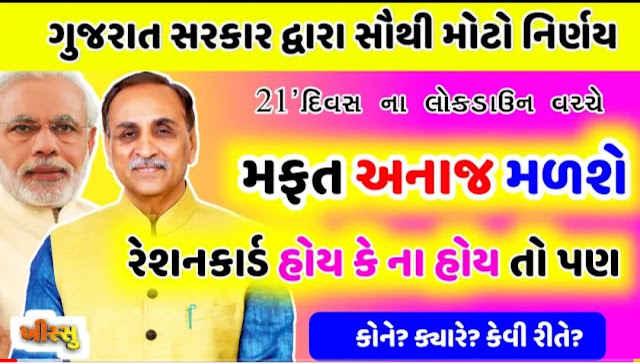 The government will distribute ration during the lockout. Cardholders and all those without cards will get ration. CMO Secretary Ashwini Kumar told in a press conference that five items of ration will be distributed tomorrow. Distribution will be done at 17 thousand shops in the state from April 17. Wheat, rice, pulses, salt, sugar will be distributed to 66 lakh families. Workers from other states have been allocated Rs 40 crore for housing

Government will distribute ration, 5 items will be distributed
Distribution will be done in 17 thousand shops, food will be provided to 66 lakh families
Grain will be available without card
What did CMO Secretary Ashwini Kumar say?

In view of the lockdown, food grains will be distributed to the poor in the state tomorrow. The workers will be given a kit of grain for free. A committee has been formed for this. Who will oversee the system. Ration card holders will be called by calling. The shopkeeper and the committee will call 25-25 to ensure that they are not crowded. In addition, those who do not have ration cards will be distributed grain kit from 4


Wheat, rice, pulses, salt, sugar will be distributed to 66 lakh families in 17 thousand shops of the state. Meanwhile, care will be taken to maintain social distance. Also, those who do not have a card will be given grain.

Those without cards from 4 will also be given grain distribution

Grain distribution will also be given to those without a card from 4. 25 card holders will be called during the day at the ration shop. Supplies will be provided based on the token method. In addition, all the bells in the state will continue through the system.