It would be confusing to know Trump's statement against the 21-day lockdown in India; Worry is spreading around the world


It would be confusing to know Trump's statement against the 21-day lockdown in India; Concern is spreading around the world. 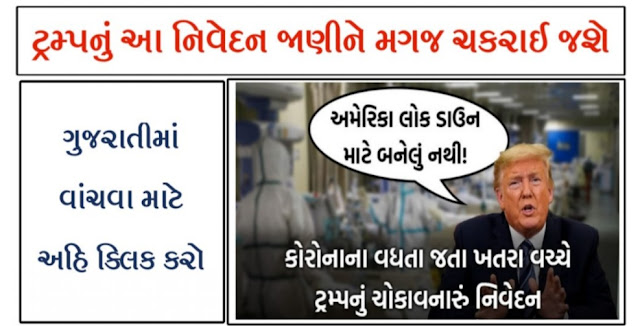 Coronavirus is now meeting the United States after China and Europe. New cases and fatalities have reached record highs in the United States, and experts say the situation will continue to worsen. Meanwhile, on Twitter and in a press conference, US President Donald Trump made a surprising statement that the United States could not tolerate a prolonged lock-down situation, and that business would begin soon, as United Schematic in state.

It is noteworthy that the death rate has not yet reached its maximum, but Donald Trump is making this statement in the wake of America's deteriorating economy. Trump says USA lockdown is not going to happen, it has to be kept open. He indicated that the current US lock-down would be opened quickly.

What is america statistics

Trump also said that if doctors were to run, they would put the whole world in lockdown. This statement was heavily criticized. People are arguing that Trump is giving more importance to business, the economy and the stock market than people's lives.


The Trump government has divided itself into two camps, one in support of its health officials or lock-down, while the other is its political and finance department officials who are advocating for the economy.

There are reports that the Trump government plans to open the lock-down slowly and carefully, under which youth will be freed earlier, who are less at risk of infection.

WHO spokesman Margaret Harrison, when asked by the media if the number of transit cases in the US was likely to be higher than in Europe, said, "We are absolutely skeptical about this when we see a sharp rise." There have been "cases facing the United States. "

It is also noteworthy that the WHO has appreciated the steps taken by the Indian government regarding lock down and warned all countries that lockout is the most effective method in these circumstances. At this time, there is an atmosphere of surprise and awe in Donald Trump's statement.