The corona epidemic has created a situation that spoils the years in schools and colleges. Even the school session that started after Diwali could not begin, so now everyone is in dilemma as to whether the schools will reopen or not. Tawa is now bringing important news about starting a school. There is a possibility that schools may not start in academic session this year. 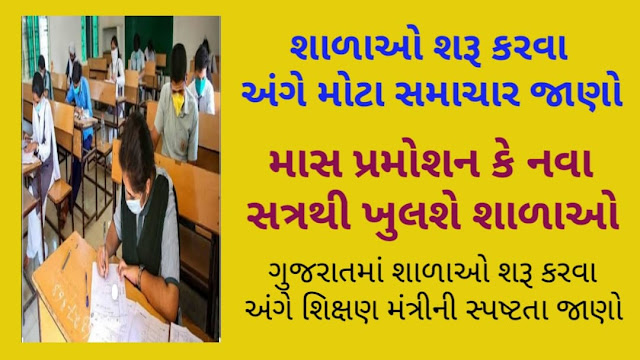 The school is unlikely to start this academic session

Government can give mass new promotion in standard 1 to 8

The parents have appealed to the government to take a decision on whether to open the school or not. Then Education Minister Bhupendrasinh Chudasama said, At present it is not considered to start a school in Gujarat. No government decision regarding mass promotion. The decision will be taken at the right time, there is no discussion at the moment. According to sources in Gandhinagar, the schools are unlikely to start this academic session. Sources believe that the government is planning to start school from the new semester.

Government can give mass new promotion in standard 1 to 8

Chances are that school may not start until April. Filling of the form for the board examination can start from January. The government is considering mass promotion in standards 1 to 8. The government may announce exams from 9th to 12th in the near future. Corona infection is a more widespread condition if schools are started.

Parents are demanding mass promotion of students from standard 1 to 8. The state government had planned to start schools after Diwali. After Diwali, Corona affairs were postponed and schools were postponed. Now parents are new hoping that schools will start from the new semester.