After farming and solar power scheme, the government has launched a new scheme for farmers

Many farmers will be able to plant simultaneously

It is heartening to say that the project is lying on land, which cannot be cultivated. Today is good news for the farmers of India, who can increase income along with farming. 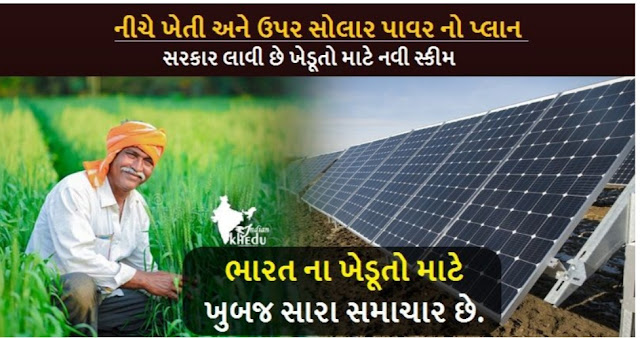 Farming, this new government scheme of solar power plant for farmers has come. Solar power plants have been installed on non-agricultural lands so that they can double their income. But if the farmer wants to set up solar plants ranging from 500 kW to 2 MW above the farm. The plant will be connected to a power distribution company and the power produced at the plant will go to disk.

Therefore, the farmer's solar power plants must be within five kilometers of the power company's sub-station to avoid transmission costs. Discom will have to buy power generated from the farmer's solar power plant. A power purchase agreement will be signed between the farmer and the discom for the purchase of electricity for 25 years. Due to the subsidy of the Ministry of New and Renewable Energy (MNRE), the farmers will pay 40 paise per unit of disc purchasing power.

Solar plan can also be applied on cultivated land


According to MNRE, it is not the case that a single power plant will be set up by any farmer. This solar power plant can operate to many farmers or peasant societies, panchayats, corporate houses. Typically, solar plants are planted on unproductive soils, but by placing a structure on the farm, a farmer can install a solar power plant. But the farmer must ensure that agriculture is not affected.

They will also get full help of the government. Farmers who are not alone or unable to do this in groups can seek the help of developers to set up solar power plants. If a farmer wants, he can lease the land to tenants for rent. In return, farmers will be able to determine income. Discom may use the bidding process to determine electricity rates. But the Power Purchase Agreement (PPA) new will last for 25 years.

To install a solar power plant, the plant must be confirmed within nine months of the letter evaluation issue. In this work, the duration of PPA can be reduced to a delay of more than two months. Disco will be paid 40 paise per unit for five years from MNRE.