Big news is coming in Saurashtra about a green procession like Diwali, this year the procession will come out but only 400 people are allowed to go. 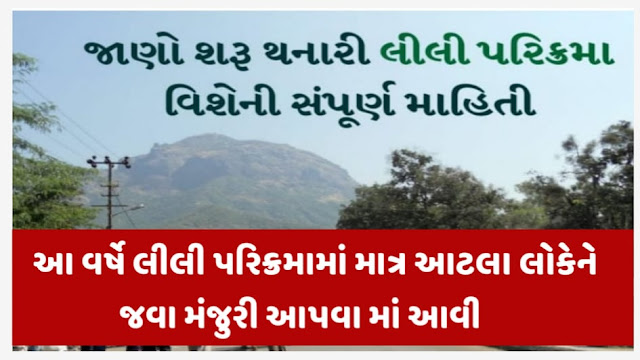 Green procession will be taken out in Junagadhi

To get the green signal, a meeting was held in place of the collector president.

400 people allowed to go to the parade

Monks and monks will decide who to include in the program

Lily Parikrama will be held in Junagadh this year

Due to the corona virus in Junagadh, the center of faith of Saurashtra, the green flag could not be organized for the last two years. Today a big decision has been taken in the meeting of the District Collector, although after this decision the displeasure of Hindu organizations has also come to the fore.

In Junagadh, where lakhs of devotees used to participate in the green procession every year, this year only 400 people have been allowed to perform. Now out of these four hundred people who will be included, it is for the saints and the corporation to decide. The Vishwa Hindu Sangathan has expressed displeasure over the issue, saying that the meeting was held only for a formality.

The traditional Kartiki Poonam of the Somnath temple, which holds the first place among the 12 Jyotirlingas, has also been postponed this year. The infection of corona in the state is negligible, but in view of the possibility of third wave, the system has collapsed.

It has been decided to postpone the Kartiki Poonam fair, which is held annually since 1955, for the second consecutive year in the presence of the world famous Somnath Mahadev. It is noteworthy that this fair was started in 1955 by the then President of Somnath Trust, Morarji Desai. Since then this fair is held for 5 days from Kartik Purnima. In which every year lakhs of devotees wave head near Somnath Dada and enjoy the fair.