Relief news for motorists, police cannot give you a memo till September 30

Relief news for motorists, police cannot give you a memo till September 30 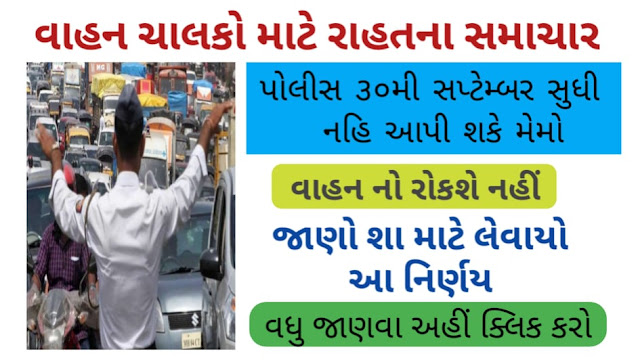 The Central Road Transport and Highways issued a notification for fee recognition and additional fee waiver by 31 July. Now the states have been asked to consider exemption from fees, taxes, renewal, fines etc. from Union Road new Transport and Highways Minister Nitin Gadkari. When have people demanded that the state of Gujarat be exempted from such fees? Now the public is waiting whether the BJP government will get rid of it.


Corona changed the rules
If the driving license, RC book, permit or any other relevant document expires during the corona virus outbreak, the police will not cut your currency until 30 September. Union Road Transport and Highways Minister Nitin Gadkari has once again announced to increase the validity of motor vehicle documents. On Tuesday, the validity of these documents was extended to 30 September. In addition, the Ministry has issued advisory notes in this regard to all the states and union territories.Earlier, due

to the lockdown, on 30 March, the ministry issued an advisory to all states and union territories to extend the validity of health, permits, driving licenses, registration and other related documents. At that time, the validity of documents ending from 1 February to 30 June was extended.